Before starting any advertising campaign for your dental practice, you need to specify some goals for the campaign. A lot of dentists who are not familiar with PPC advertising would choose a specific ROI like 300% or 400% for their campaigns without knowing that they might be losing money by setting up such a high ROI goal. As a dentist your ultimate goal is to maximize your profit after deducting advertising cost. So instead of giving your ppc manager a budget and asking him to maximize marketing ROI while staying within budget, you need to tell him to maximize your net profit while staying within budget. 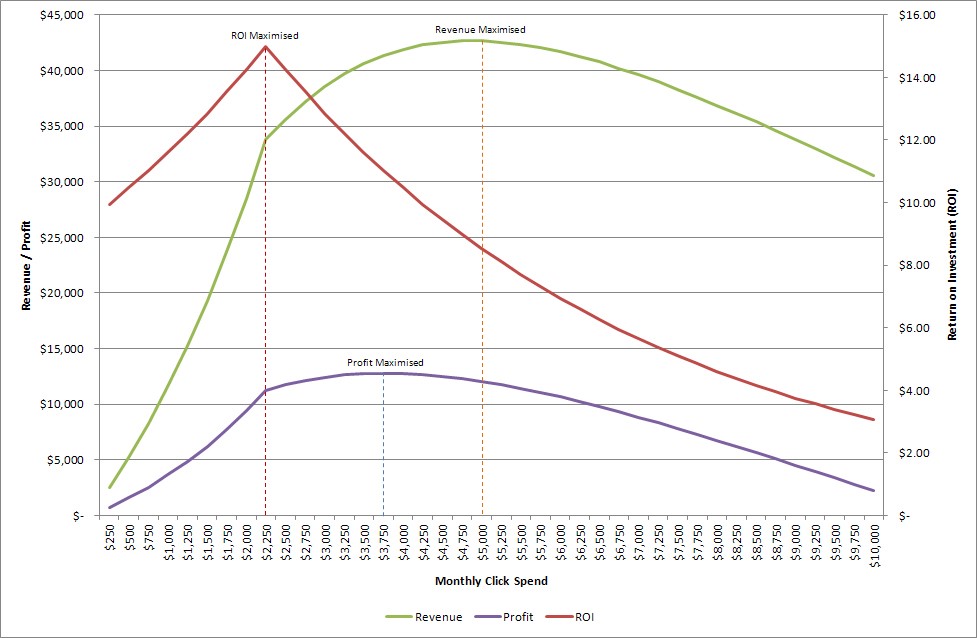 During the early phase of any PPC campaign you will find that ROI increases as you optimize the campaign. Then you increase your advertising budget and optimize some more. After that you keep increasing budget and optimize the campaign further until you hit a Peak ROI of the campaign. At this stag all the main avenues of optimization have been exhausted and the campaign is optimized for maximum ROI. Further optimization of ads, keywords, bids etc, will not result in improving ROI. However, the profit resulting from the campaign is not at it’s maximum at this stage. This is because in order to achieve maximum ROI, you have sacrificed some low ROI traffic that would earn you more net profit.

If your goal was to maximise your campaign ROI, then you would be right in maintaining the campaign in this state for as long as possible. However, doing so would mean that you are leaving a significant amount of profit on the table, since your PPC campaign is not optimized for maximum profit but for maximum ROI. Therefore, if you want to squeeze out last chunk of profit from your PPC campaign, you need to ignore your ROI goals and focus on increasing spend on less efficient but still profitable keywords/audiences. You have to continue increase spend until, the incremental profit resulting from an increase ad spend is equal to the incremental ad spend. At that stage, the campaign is optimized for maximum profit. Increasing ad spend of the campaign any further would result in a negative profit incremental profit and thus reduce total profit from the campaign.

One final point to note is that maximum revenue doesn’t occur until after maximum profit has been achieved. Therefore, you should revenue interchangeable with profit as it can mislead you into increase your advertising spend more than required.